Venomous snakebite — Significance of the bite site and local reaction

Snakebite is an environmental and occupational hazard in India. Death and disabilities due to snakebite remains a major public health challenge. For the fight against this battle a greater investment should be focused on the preventive measures. This includes understanding of the common seasons of snake bites, location and also the site of snake bite. Understanding these will help in taking better preventive measures.

Materials and Methods: This is a 6-year retrospective observational study of 70 venomous snake bite cases admitted to a tertiary care center in South India. Inclusion criteria has been all confirmed case of envenomation by venomous snake bite. Chi square test was done to find the association between categorical variables.

Conclusion: Snakebite is a neglected tropical disease and remains as an underestimated cause of accidental death in modern India. Significance of bite site along with seasonal variations in snakebites helps in formation of effective preventive strategies, which along with prompt primary treatment holds the key in reducing the impact of venomous snakebite.

Snakebite is an environmental and occupational hazard in India. Indian subcontinent harbors a variety of venomous and non-venomous snakes. Snakebite envenoming can become a potentially life-threatening condition. Venom is composed of different types of toxins. Currently, there are more than 3000 species of snakes in the world, approximately 250 of these are listed by WHO. More than 200 species of snake are identified in India, 52 are poisonous. Majority of bites are attributed to big four — Indian cobra (Naja naja), common krait (Bungarus caeruleus), Russell’s viper (Daboia russelii) and saw scaled viper (Echis carinatus).1

Death and disabilities due to snakebite remains a major public health challenge in many part of the world. The World Health Organization (WHO) estimates that about 5 million snakebites occur each year, resulting in up to 2.7 million envenoming’s of which 81,000–1,38,000 people die each year from snakebites worldwide, and about three times that number survive and but are left with amputations and permanent disabilities.2 In India alone, they have varied from 11,000 to 50,000.3 Disabling conditions such as amputation, kidney disease and severe scarring are also seen among survivors.

The World Health Organization (WHO) has designated snakebite as a neglected tropical disease in 2017, and has launched a global initiative to halve the number of deaths and disabilities it causes by 2030.

In the report put forward by the Seattle-based University of Washington’s Institute for Health Metrics and Evaluation (IHME)4, it has been estimated that for Indian citizens, snakebites annually cost an equivalent of 3 million years of health and productivity. This is indeed a burden for a developing country. For the fight against this battle a greater investment should be focused on the preventive measures. This includes understanding of the common seasons of snake bites, location and also the site of snake bite. Understanding these will help in taking better preventive measures for at risk population, which is the main focus of our study.

This is a 6-year retrospective observational study of 70 venomous snake bite cases admitted to a tertiary care center in South India. Inclusion criteria has been all confirmed case of envenomation by venomous snake bite. Patients whose history were not clear and whose follow up details were not available, are excluded from the study.

During the study period, total of 82 patients with venomous snake bite presented to the Emergency department (ED). 12 patients were excluded using the exclusion criteria. Hence the study sample size is 70. The mean age in our study is 34.66 ± 18.57 years. 57.1% were male and 42.9% were females. The most common age group that we encountered was 21 – 40 years (38.57%). This is mostly because of the outdoor occupation and out dwelling work they perform. 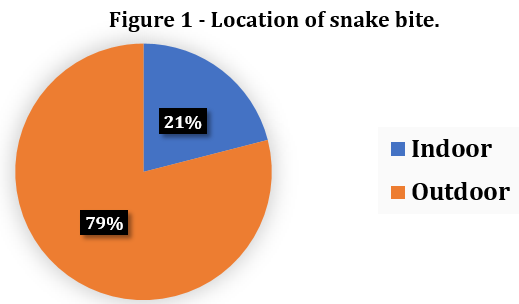 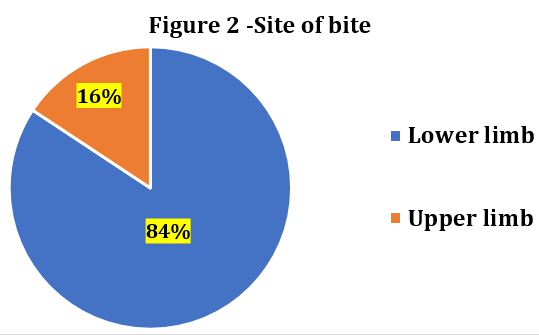 Comparison between site of bite and local reaction alone 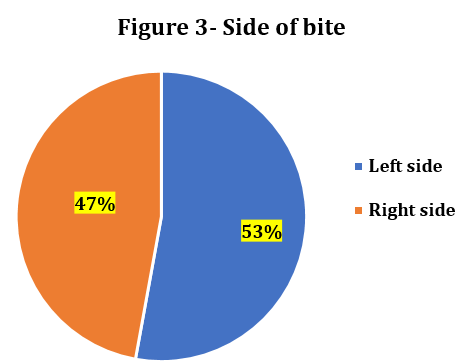 Comparison between side of bite and local reaction alone

We could not find a statistically significant correlation between side of bite and local reaction alone (p=0.198). (Table 3)

Comparison between side of bite and local reaction alone

We could not find a statistically significant correlation between side of bite and local reaction with hemotoxic / neurotoxic symptoms (p=0.369). (Table 4) 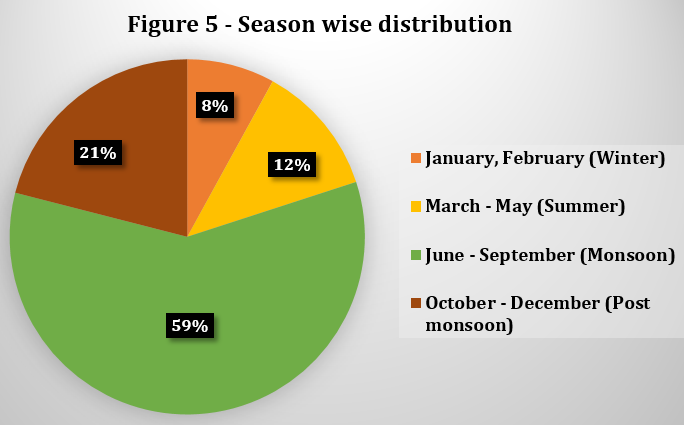 India is inhabited by more than 60 species of venomous snakes — some of which are abundant and can cause severe envenoming.5 The majority of snakes do not bite without provocation; most bites are inflicted when the snakes are inadvertently trodden upon. Males are bitten almost twice as often as females.6 Even in our study majority of envenomation due to snake bite was seen in males. Rural cropping and livestock workers, hunter/gathers and their children are among the most affected. Children often suffer more severe effects than adults because of their smaller body mass. Lack of footwear contributes significantly to the risk of snakebite for both adults and children.

Snakebite remains an underestimated cause of accidental death in modern India. During the 2001–2014 MDS study period, the average age-standardized snakebite death rate (using the Indian census population of 2001 to take into account the minor change in age structure) was 4.8 per 100,000 population, falling annually by 0.8%.7

According to WHO Guidelines for the Clinical Management of Snake bites in the South-East Asia Region, Local reaction (local symptoms and signs) in the bitten part can vary from a fang marks, local pain, local bleeding, bruising, lymphangitis, lymph node enlargement, inflammation (swelling, redness, heat), blistering, local infection, abscess formation and necrosis. Local reaction can occur even without systemic features. Even without systemic features, Anti snake venom (ASV) treatment is recommended if and when a patient with proven or suspected snakebute develops one or more of the following signs Local swelling involving more than half of the bitten limb (in the absence of a tourniquet), Swelling after bites on the digits (toes and especially fingers), Rapid extension of swelling (for example beyond the wrist or ankle within a few hours of bites on the hands or feet), Development of an enlarged tender lymph node draining the bitten limb. In our study, majority of bites were on the lower limb especially on the foot followed by toe and ankle. This is similar to study published by Hifumi et al. and also by Sharma et al.

Most venomous bites occurred in exposed parts of the body. Mainly the foot and toe of lower limb (64 %) was effected. In upper limb, finger and palm were the common sites bitten. This is in concordance with the earlier reports.8, 9, 10

Bites sites are also prone for producing local reaction. In our study, on presentation to the ED, 1/3rd of the bites in the lower limb produced only local reaction without systemic effects and we found statistically borderline significant correlation between site of bite and local reaction alone (p=0.05). Even though majority of patients (61%) with snakebite in the lower limb had local reaction with hemotoxic / neurotoxic symptoms, we could not find a statistically significant correlation between site of bite and local reaction with hemotoxic / neurotoxic symptoms (p=0.236). So caring the bite site is equally important as management of the envenomation and may even be an indication for starting Anti Snake Venom therapy. Bite sites especially in lower limb can easily get contaminated. It is of great importance that the bite site is taken proper care. Enzymes like Hyaluronidase promotes the spread of venom through tissues and proteolytic enzymes will increase vascular permeability which causes oedema, blistering, bruising and necrosis at the site of the bite. Immobilising the bite site is the most critical primary management of snake envenomation. We should be very careful to avoid any interference with the bite wound (like incisions, rubbing, vigorous cleaning, massage, application of chemicals). This will help to prevent secondary infection and to prevent absorption of venom. In our study, 79% snake bites occurred outdoor and 21% occurred indoor. This is similar to the study published by Suraweera et al.7 Snakebites are usually seen in people of rural areas, construction labourers, and farmers working in fields or sleeping outdoors. This is in contrary to few studies, which describes nocturnal occurrence of snakebites.12 This is mainly due to the less personal protection foot wares that people use especially while doing manual labour and also while walking in the dark.

The country's meteorological department follows the international standard of four seasons with some local adjustments: winter (January and February), summer (March, April and May), monsoon (rainy) season (June to September), and a post-monsoon period (October to December).

Most human snakebites occur during the monsoon season because the habitat of snakes and their prey gets flooded and gets water logged. The breeding habits of frogs closely follow the monsoons. Even rats and mice are always in close proximity to human dwellings.8, 9

Our data is also in concurrence with the study published by kukarni et al, where May – July were the most common season for snake bites (67%) followed by October to December.10

Few of the preventive strategies for avoiding snakebite would be to avoid moving through places where snakes may live (like marshes, deep holes in the ground), avoid sleeping on the floor especially outdoor, use a torch/flashlight while walking through the dark, be specially vigilant about snake bites after rains, during flooding, at harvest time and at night, use boots and long pants - in possible snake inhabitant areas, never handle a snake with bare hands - even if you think it is dead (recently killed snakes may still bite by reflex), snakes may come after their pray like rat/frog — so keep area around your house clean.

For the fight against this battle against snakebite, a greater investment should be focused on the preventive measures. Understanding of the common seasons of snake bites, location and also the site of snake bite helps each set of population to establish their preventive strategies in a better way. Even if snake bite occurs, effective treatment strategies including Anti Snake Venom therapy are crucial which needs to be initiated promptly. Effective preventive and treatment strategies will help in reducing mortality and morbidity due to snake envenomation.

Snakebite remains an underestimated cause of accidental death in modern India which is also an environmental and occupational hazard. Significance of bite site along with seasonal variations in snakebites, will help in understanding the concerns in deeper way and guide in formation of effective and focused preventive strategies which needs to be the focus in controlling snakebite. Bite site and local reaction caused by it, is also pivotal area in the treatment strategies. Prompt primary treatment including ASV therapy holds the key in reducing the impact of venomous snakebite.

Whether the bites occurred in and snake inhabitant areas were not. Also, if these patients used any preventive strategies could not be identified.

A Kasturiaratne A R Wickremasinghe N d Silva N K Gunawardena A Pathmeswaran R Premaratna The global burden of snakebite: a literature analysis and modelling based on regional estimates of envenoming and deathsPLoS Med200851121810.1371/journal.pmed.0050218

COVID-19 vaccine hesitancy in the US by county and ZIP code2021http://www.healthdata.org/

R Whitaker A Captain Snakes of India : the field guide4952004https://www.worldcat.org/title/snakes-of-india-the-field-guide/oclc/741793644