Introduction: This study aims to describe the clinical and forensic features of the cocaine body packer in Senegal.

Materials and Methods: This research work is a retrospective and descriptive study. It was conducted based on 19 suspect cases attended for medical care at the Hospital of tambacounda.

Results: Suspects were exclusively male subjects, aged 24 to 33 years and Nigerian citizens. All of them were asymptomatic. Pelvic touch was positive in 42.1% of cases. Abdominal radiography pointed out that all the suspects presented with damage (100%). The average number of drug pellets carried per person was 43+/- 20 units.

West Africa is a major transit area for drug trafficking from Latin America to the European or north-American market.1 The volume of cocaine shipments transiting across the region, each year, is approximately estimated at a total value of 1.2 billion US dollars.2 Drug traffickers in the region regularly used ‘’ Body packing’’ for carrying drugs. « Body packing » (BP) consists in having persons ingest or insert in their body illicit packed substances in order to ensure their transportation.3 Concealment in the digestive tract is the predominant Body packing form.4 This means of transportation involves cocaine and heroin in particular, and its use is becoming increasingly common in West Africa in general and in Senegal in particular. Curiously, very few cases have been reported in the medical literature. We herein report a series of 19 cases of Body packing attended in the surgical emergency department of the Regional Hospital of Tambacounda on suspicion of drug body packing or carriage.

This retrospective study covered all the period running from May to November 2014. It was carried out in the Regional Hospital of Tambacounda (Senegal). This landlocked town is 480 km far from the capital city of the country. It is a major area for the transit and exchange of goods from or to countries in the sub-region. The study took in account the subjects arrested by the police or gendarmerie forces for suspicion of drug body packing and referred for examination to the surgical emergency unit of the Hospital of Tambacounda. Only subjects with a judge requisition were included in the study.

The informations reported were about subjects’ general characteristics (age, sex, and nationality), results of the forensic examination (clinical data of medical imaging), medical care, and characteristics of carried substances (number of drug pellets, form, weight, and nature of the product). The product was identified using a rapid colorimetric test (Nik Public safetryIncÒ). 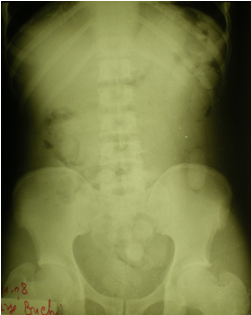 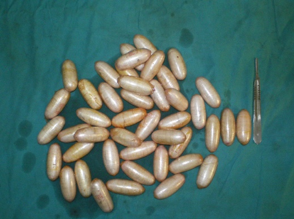 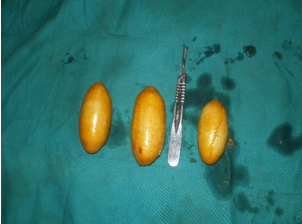 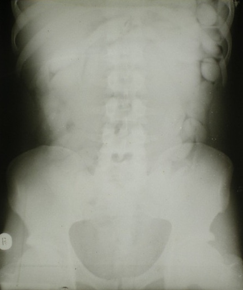 Profile of the suspects

In total, 19 cases were colligated. There were exclusively male subjects and Nigerian citizens. The median age was 29 years with extremes of 24 and 33 years.

The suspects were all referred to the hospital within the 24 hours following their arrest. Clinically, each of them had not reported any symptoms. The digital rectal exam was contributory in 8 patients out of 19 (Table I). Medical imaging was systematically used. Plain abdominal radiographs were contributory on all the cases. Figures 1 and 2 show the Plain abdominal x-rays performed in 2 patients of the series.

The 19 subjects benefitted from an evacuation enema using paraffin oil. Among 10 patients, this treatment was completed by ingestion of food accelerating gastrointestinal transit and laxatives. The drug pellets collected as whole and complete packs were all ovoid-shaped. On average, there were 43 +/- 20 pellets per subject with extremes ranging from 3 to 66. They exclusively contained cocaine. During weighing, the average amount of narcotics carried per subject was 769 +/- 390 g with extremes ranging from 150 to 1500 g. Figures 3 and 4 show the pellets found out in 2 of the patients of our series.

In our series, none of the subjects presented with complications. There was no case of overdose or intestinal obstruction. The radiological examinations performed on the second day showed the vacuity of the digestive system.

Among our cohort of 19 cases involved in Body packing, the subjects attended and screened are exclusively male and young adults. In Amsterdam, De Bakker et al. also observed a mean age of 33 years and a male predominance (68.8%)5. Among women, drug traffickers prefer to use concealment in the genital tract.6, 7 The main motivating factor for smugglers is the sums of money that were offered to them in exchange for that risk-taking. Some cohorts of cases concerning children were also described.8 None was observed in our series. In the West African region, drug trafficking is usually associated with human trafficking. Due to their vulnerability, young children are the first victims of human trafficking. As a matter of fact, they represent a significant source of illicit income through forced labor or prostitution.9 As far as Body packing is concerned, police officers have a low tendency to suspect children.

In our series, all the patients were asymptomatic. In the context of Body packing, the most common signs are abdominal pain (41.2%), vomiting (16.8%), and agitation (11.1%).5 The presence of those signs is associated with a significant risk for poisoning. In general, poisoning is the outcome of the breaking of the organic tissue used to protect the drug. Body packing may also be complicated by the occurrence of intestinal obstruction. The appearance of poisoning or obstruction signs justifies surgery (laparoscopic surgery).5, 6, 7, 8, 9, 10

The diagnosis was based on a pelvic exam (digital rectal exam) and abdominal radiography. The sensitivity of those tools was respectively 42.1% and 100%. The pelvic exam is a screening tool used for screening outside the hospital settings, especially during border controls. Its performances are poor. Instead, medical imaging examinations i.e. conventional radiography (plain abdominal radiography), radiography with digestive tract opacification (barium swallow), scanner, and ultrasound, are preferred. The preponderance of conventional radiography is due to the fact that it was the most accessible way (availability of the equipment). The drug bags may be viewed on the x-ray images in the form of oval or round densities surrounded by a halo of gas.11 X-ray performances may vary from a study to another (45-95%) but they do not reach the performance level of the scanner.12, 13 False negatives are less common when the scanner is used. This makes it the tool of choice in the domain of forensic expertise. The scanner also enables to determine the type of drug carried.14, 15

The pellets collected after evacuation were all of ovoid shape. These were cocaine pellets covered with plastic thin film. There were on average 43 +/- 20 per subject and the maximum number of pellets carried by a single person was 66. The packing materials for Body packing may vary significantly. The most common ones are latex gloves, condoms, and inflatable balloons. The size, weight, and quantity of packages ingested usually depend on the following criteria: type of drug carried, smuggler’s height, ingestion capacity, and sophistication of the trafficker network.16

Narcotic drug body packing is a reality in West Africa. The medical teams’ assistance should be increasingly requested in order to attend those cases as regards both forensic aspects and management of possible complications. The counter-narcotics policies should also invest in building capacity by financing effective diagnostic tools.