Myocardial Bridging is one rare congenital anomaly which has been neither reported frequently nor looked for during routine autopsy in Indian context. One of the reasons may be lack of awareness about this finding. Even many autopsy studies done on sudden natural cardiac deaths, do not focus to find and report this anomaly. We hereby report one such case, where a young adult male succumbed to death following exercise, and only significant autopsy finding was Myocardial bridging. Even though myocardial bridging has not been labelled as primary cause of death by researchers, it is one such anomaly which leads to events predisposing angina, ischemia and arrhythmia leading to cardiac arrest.

Myocardial bridging (MB) is a congenital coronary anomaly, characterized by the presence of a band of cardiac muscle overlying a segment of a coronary artery, along its normal course in the epicardial adipose tissue. The tract of the coronary artery that penetrates within the myocardium and lies beneath the muscle is called “tunnelled artery” and the presence of the MB allows dividing the vessel in three sectors: proximal, underneath and distal to the bridge.1

It was first recognized on autopsy by Reyman in 1737 and an in-depth analysis of autopsy samples was first presented by Geiringer et al in 1951, but clinical interest and systematic research was triggered by an observed association of myocardial bridging with myocardial ischemia.2 It was first described angiographically by Portmann and Iwig in 1960.3

These investigators described a characteristic ‘‘milking effect’’ seen at the site of a myocardial bridge. This characteristic appearance of myocardial bridging represents systolic constriction of a coronary artery that is embedded in the myocardium for a variable distance. This segment is squeezed (milked) in systole by contraction of the surrounding muscle and disappears during diastole.4

The incidence of MB ranges from 1.5 to 16% when assessed by angiography and up to 80% in some autopsy series.1 The Left Anterior Descending Artery is the most frequently affected vessel (70% in an autopsy series) and in some cases hearts contain more than one bridge, affecting the same vessel or different coronaries.5, 6

So far, MB has not been attributed as primary cause of death, but cases having MB as only significant autopsy finding, hints towards consideration of this finding which initiates a cardiac event eventually leading to death.

A 29-years old male, air ventilation worker by occupation, non-smoker and occasional alcohol consumer, with no known systemic disease, was rushed to the Casualty, Sassoon General Hospital, Pune following an episode of unconsciousness, just a few minutes after exercise in the morning. Later he was declared brought dead on same day and requisition for autopsy was done. On detailed history-taking, it was found that, he had an episode of chest pain last year for which treatment was taken, details of which were not available with relatives. He was apparently alright thereafter. His personal and past history was unremarkable. Family history revealed history of myocardial infarction in his 54-years old father, who is also a known case of diabetes mellitus and hypertension.

External examination at the time of autopsy showed that the deceased was of medium built with No any visible external surface injury. Internal examination was unremarkable except for the findings in the heart.

Stomach and piece of small intestine with contents, pieces of liver, spleen and both kidneys and small amount of blood preserved for chemical analysis were negative for toxins or abnormal chemicals. 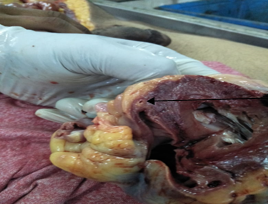 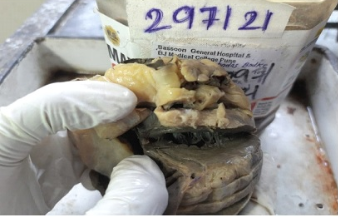 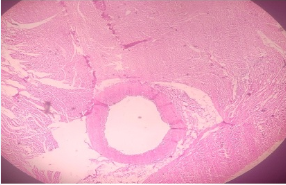 MB are most commonly localized in the middle segment of the LADA.7 However, in present case, it was located in the proximal segment of LADA i.e. 0.8 cm distal to origin. In the presence of two parallel LADA branches, one frequently takes an intramural course.8 In present case, only one branch of LADA was noted, which took intramural course. Angiographically, MB are almost exclusively spotted in the LADA. They are located at a depth of 1 to 10 mm with a typical length of 10 to 30 mm.9 In present case, MB was located at a depth of 05 mm and for a length of 10 mm.

Arterial segments may also be located in a deep interventricular gorge. Such “incomplete” bridges may appear during adulthood in concomitant disease, in which a segment is compressed during systole although its surface is not fully covered by myocardial fibres, but by a thin layer of connective tissue, nerves, and fatty tissue.2 In present case, the tunnelled segment was fully covered by myocardial fibres.

The segment proximal to the bridge frequently shows atherosclerotic plaque formation, although the tunnelled segment is typically spared.10 It is reported in previous studies that the endothelium at the entrance of the tunnelled artery is flat, polygonal, and polymorph, indicating low shear, whereas in the tunnelled segment, it is helical, spindle-shaped orientation along the course of the segment as a sign of laminar flow and high shear.11 Low shear stress may induce the release of endothelial vasoactive agents such as endothelial nitric oxide synthase (eNOS), endothelin-1 (ET-1), and angiotensin-converting enzyme (ACE).12

Angina, myocardial ischemia, myocardial infarction, left ventricular dysfunction, myocardial stunning, paroxysmal AV blockade, as well as exercise-induced ventricular tachycardia and sudden cardiac death are accused sequelae of myocardial bridging.2, 3, 4, 5, 6, 7, 8, 9, 10, 11, 12, 13, 14, 15 An increase in sympathetic drive during stress or exercise likely facilitates ischemia, because tachycardia leads to an increase of the systolic-diastolic time ratio at the expense of diastolic flow. Increased contractility during stress further aggravates systolic (and diastolic) compression.16 In present case, the deceased person fell unconscious just a few minutes after exercise. Secondly healed myocardial infarct was observed adjacent to the tunnelled segment, suggestive of ischaemic event in the past, most likely due to MB.

As per the study conducted on dogs by Rouleau et al, when arterial occlusion was limited to systole, phasic coronary blood flow and distal coronary pressure was observed to resume with considerable delay contributing to reduced myocardial oxygen consumption and increased coronary sinus lactate concentration.17 This delayed diastolic relaxation was later identified in humans as an important mechanism contributing to ischemia with frame-by-frame analysis of intra-vascular ultrasound images.3 The likelihood of ischemia also increases with the intra-myocardial depth of the tunnelled segment.2, 3, 4, 5, 6, 7, 8, 9, 10, 11, 12, 13, 14, 15, 16, 17, 18 In present case, the tunnelled segment was located at a depth of 0.5 cm from the epicardium.

Cases of chest pain, heart burn, etc. should be thoroughly investigated, especially in young living adults, for earlier detection of MB. In all young adult deaths, meticulous autopsy should be done to look for evidence of MB, as it is not just an anatomical variant but may have significant pathological sequelae. In the absence of other significant findings on post-mortem examination, MB can be considered as a primary cause of death considering the onset, duration and progress of the symptoms, predisposing factors like exercise and autopsy findings.

W C Roberts B S Dicicco B F Waller J C Kishel B M McManus S L Dawson Origin of the left main from the right coronary artery or from the right aortic sinus with intramyocardial tunneling to the left side of the heart via the ventricular septum: The case against clinical significance of myocardial bridge or coronary tunnelAM Heart J19821042303510.1016/0002-8703(82)90206-x