A traffic collision, also called a motor vehicle collision, car accident, occurs when a vehicle collides with another vehicle, pedestrian, animal, road debris, or any stationary obstruction, such as a tree, pole or building. Traffic collisions often result in injury, disability, death and damage to property as well as financial cost to both the society & individuals involved.

A traffic accident is any vehicular accident occurring on a public road (i.e. originating on, terminating on or involving a vehicle partially on the road). These accidents, therefore, include collision between various kinds of vehicle or with bicycles or pedestrians or fixed obstacles.1 Traffic collisions often result in injury, disability, death and damage to property as well as financial cost to both the society & individuals involved. In India, rate of traffic accident is increasing day by day whereas emergency services & trauma care are underdeveloped. Rapid urbanization, motorization, poor enforcement of traffic laws, poor awareness level has exacerbated the situation. Without increased efforts and new initiatives, the total number of road traffic deaths in India is likely to cross the mark of 250,000 by the year 2025. There is thus an urgent need to recognize the worsening situation in road deaths and injuries and to take appropriate action. Road traffic fatalities and injuries are, to a great extent, preventable, since the risk of incurring injury in an accident is largely predictable and many countermeasures, proven to be effective, exist. The most effective way to reduce fatalities and injuries would be through an integrated approach involving close collaboration of many sectors. Progress is being made in many parts of the world where multisectoral strategic plans are leading to incremental reductions in the number of road accidental fatalities and injuries (Evans, 2003).2 A total of 4,36,675 road traffic accident cases were reported in the country out of which the State of Mizoram contributed only 50 cases, 21 deaths and case fatality of 34.4% in 20183

A cross sectional retrospective study was conducted in a tertiary care hospital in Mizoram during the period of 5 years from 2014 to 2018 on all the cases of fatal road traffic accidents cases brought during this period to study the demographic profile of victims of fatal Road Traffic Accident in Aizawl, Mizoram.

Showing types of off ending vehicles 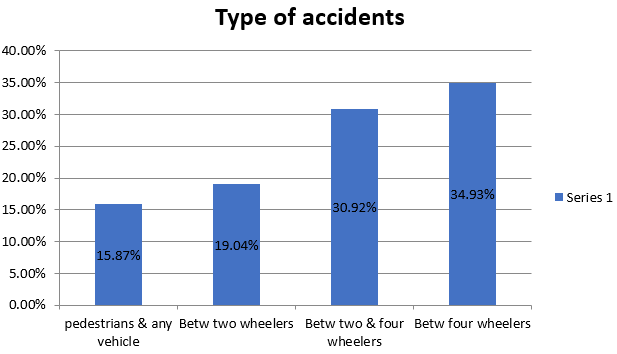 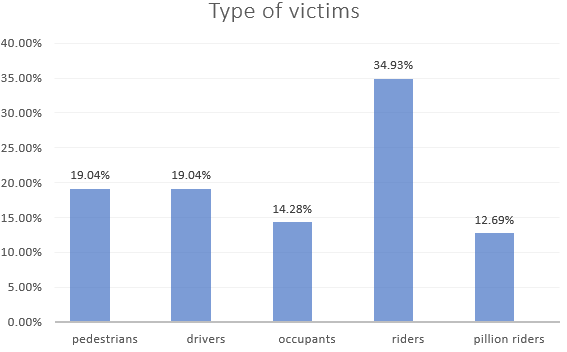 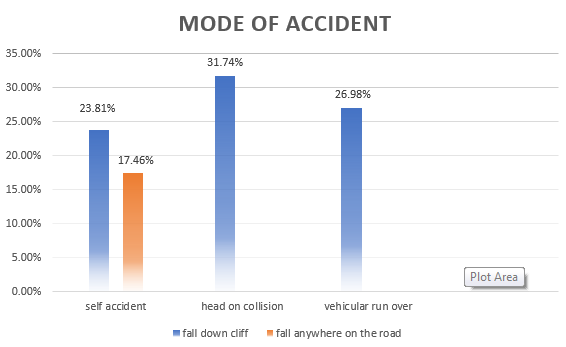 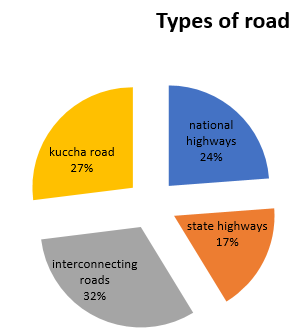 Showing cause of deaths 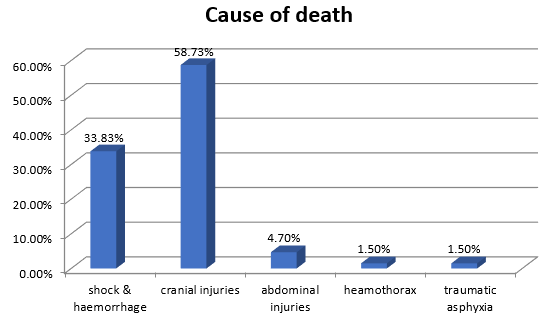 It was carried out after obtaining the approval of the concerned institutional ethics committee. A thorough analysis of the history and post-mortem findings was carried out regarding parameters like age & sex distribution, type of vehicle involved, type of victim, survival time, mode of accident, internal findings etc. The results so obtained were statistically analysed.

Out of total number of 416 cases brought for autopsy, 63 cases were RTA (15.14%). Out of 63 road traffic accident cases, 75% were males & 25% females with the male & female ratio being 3:1. The highest number of victims were observed in the age group of 21-30 years (33%) followed by 31-40 years (21%). The type of offending vehicle involved were mostly heavy vehicles (38.09%) like trucks and lorries followed by cars & light motor vehicles (31.74%) as shown in Figure 1. In the type of accident, it was found that collision between four wheelers was the most common type (34.93%) followed by collision between two-wheeler & four-wheeler (30.92%) as shown in Figure 2. Maximum cases were able to reach hospital (42.85%) where death occurred at the hospital, with an equal number of spot deaths (42.85%). In the present study, the maximum numbers of victims were found to be two-wheeler riders with 34.93% and the pedestrians (19.04%) and drivers (19.04%) were the next most common victims as shown in Figure 3. Interestingly, the maximum cases recorded were that of self-accidents (41.27%) and among them 23.81% were cases of falling down the cliff as shown in Figure 4. Most of the accident in our study happened in the interconnecting roads within the state accounting for 32% followed by Kuccha road (27%) as shown in Figure 5. The most commonly involved part of the body was found to be head (50.70%) which is followed by chest & abdomen (30.10%). In this study, the most common cause of death was found to be cranial injuries with 58.73% and shock & haemorrhage being the next most common cause of death (33.83%) as shown in Figure 6.

In a study conducted by Elliott S et al.4 in Worcestershire, the highest incidences were recorded in the age group of 17-24 years and also in study conducted by Millo T et al.5 the highest number of incidence was recorded in 21-30yrs (38.2%). This is comparable to our study where, the highest number of victims were observed in the age group of >20-30years (33%). It may be because of the fact that most of people in this age group indulge in speed riding as well as most of them are two-wheeler riders. Also, they tend to be overconfident leading to fast and reckless driving. In our study the male female ratio was 3:1 with male contributing 75% of the cases, this may be because of fact that male spend more time outside than female. This is agreement with the findings of study conducted by Millo T et al.5

The most common causative agent for road traffic accidents in the study was heavy-duty vehicle such as trucks, lorries and buses (30.9%) which is in accordance to results observed by Kaul A et al. and Tirpude BH et al.6, 7 where the most frequent offending vehicle was truck constituting 58.52% and 47.5% respectively. Commercial truck and lorry operations, particularly privately owned ones, are often based on timetables that put pressure on drivers to speed. In many places in India, private bus operators link the wages of drivers with the ticket receipts and number of trips, which encourages high speeds.

The highest number of victims of road traffic accident in our study were constituted by two-wheeler riders (34.92%). This is in contrast to findings of Millo T et al, Kaul A et al., Tirpude BH et al. and Odero W5, 6, 7, 8 in which pedestrians were the commonest victims. This may be due to large population of young adults owning a two-wheeler for commuting on the steep & curved roads of this region. In our study maximum cases were seen as self- accident (41.21%) with 23.81% cases of fall from cliff which is in contrast of the observation Meera The et al.9 where 85.05% of the cases were due to collision. This may be due to the difficult hilly terrain of the region with curved roads & reduced visibility. In the present study, most of the accident happened in the interconnecting roads within the state which may be due to mixed nature of road traffic on its roads — with pedestrians, bicycles, scooters, motorcycles, auto-rickshaws, taxis, vans, cars, trucks and buses sharing the same road space.

The most common body part involved was head (50.70%) and major cause of death of the victims of road traffic accident were found to be due to head injuries (58.73%), followed by shock and hemorrhage (33.83%). This is in agreement with the finding of Ricci G et al.1where majority of the cases (32%) had cranial injuries. This may be due to the lax traffic rules, where wearing of head gears and helmets are mandatory but not enforced properly in this part of the country.

This study is one of the first of its kind to be conducted in the State of Mizoram & in this study, one of the most common mode of accident being self-accident by falling down steep cliff of mountain and hill. Several factors are responsible for road traffic accident but the hilly terrain & reduced visibility may be one of the factors responsible. Proper designing of roads & minimizing the fault of drivers are essential to prevent road traffic accidents in hilly terrain. Compulsory use of helmet & strict enforcement of speed regulation, improving visibility of drivers at night or during fog can be effective in preventing mortality & morbidity.