Aruna and Prasanth: Comparison of dental caries and periodontal disease with dermatoglyphic patterns and salivary pH

Introduction: Dermatoglyphic patterns are dermal ridge configurations present on the fingers, palm, toes and soles of human which are valuable in the diagnosis of many diseases associated with genetic disorders. Although the aetiology of dental caries and periodontal diseases is multi-factorial, we hypothesize that they may have genetic predisposition. We also evaluated its association with environmental factors like salivary pH to assess any possible correlation.

Sir Harold Cummins introduced the term Dermatoglyphics in 1926, which is derived from two Greek words (Derma-skin; glyphics-carvings) refers to the study of the naturally occurring patterns on the surface of the hands and feet.1, 2, 3, 4, 5 By the end of 19th century, Sir Francis Galton put forth a rule called ‘proof of no change’. This rule states that dermatoglyphics of an individual remain unchanged throughout their lifetime.2 They are considered as window of congenital abnormalities and is a sensitive indicator of intrauterine anomalies.1, 2, 3

Dermatoglyphic patterns are largely genetically determined and remain unchanged from birth to death.1 They are subjected to alteration when both environmental and genetic alterations exceed threshold level during the development and differentiation of dermal ridges.4, 5, 6, 7, 8, 9, 10, 11, 12, 13, 14, 15, 16, 17, 18, 19, 20 Around 10th to 11th week of gestation, the first appearance of these ridges are in the form of localized cell proliferations which shows shallow corrugations that project into the superficial layer of the dermis, which was given by William J Babler in 1976.5 There are two types of ridges formed which are named as primary and secondary ridges. Primary ridges are responsible for the formation of dermatoglyphic patterns whereas secondary ridges found at the apex of the primary ridges at regular intervals were modified into sebaceous glands.5, 6 Dermatoglyphic patterns can determine a number of parameters which could be helpful in diagnosis and treatment of examined individuals since they were unique for each person, and is not even same in monozygotic twins. Thus, they acts as important tool in assessing the children with suspected genetic disorders and also in forensics.2

The application of these patterns to oral manifestations like dental caries and periodontal diseases are rationalized due to similarities in environmental and genetic factors between teeth and skin during their development. Both the ridged skin and teeth develop at the same time around the 6th to 7th week of the embryonic period and from the same layer (ectoderm). Hence, the genetic information contained in the genome is dissipated during this period, and any disturbance which affecting the tooth development and structure will be simultaneously reflected through change in dermatoglyphic patterns.7

The present study was designed to evaluate the comparison between dermatoglyphic patterns, dental caries and periodontal disease by analyzing the fingerprint patterns. The salivary pH was also recorded from all the subjects to assess any possible correlation. 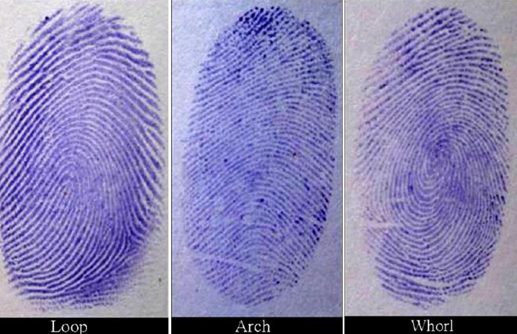 Patients who were having dental caries and CGP were selected from regular outpatient department of Oral Medicine and Radiology, CKS Theja dental college, Tirupati, Andhra Pradesh. The study protocol was approved by the institutional ethical committee. All the participants were explained about the study and informed consent was obtained. Non-willing subjects and subjects who were not able to record their finger prints, e.g., those who had trauma to fingertips, subjects with skin disorders, etc., and those with systemic diseases were excluded from the study.

Comparison of all pattern types between Group I and III.

Comparison of all pattern types between Group II and III.

Comparison of all pattern types between Group I & II.

Mean salivary PH of all the three groups

The study sample included 100 individuals within the age group of 20-45 years divided into three groups:

Method of collection of data

The finger prints from all the three groups were recorded using the stamp pad, A4 size white sheet. All the patients were instructed to clean their hands with soap and water followed by drying before imprinting to enhance the quality of dermatoglyphic patterns. A thin layer of stamp pad ink was applied to the fingers and palms of both hands and finger prints were taken on an A4 size white sheet. Once satisfactory finger prints were obtained, then patients were instructed to wash their hands with oil, soap and water.

The obtained dermatoglyphic patterns from finger tips i.e., presence of arches, loops and whorl patterns were assessed with the help of a magnifying lens. Then the data collected were subjected to appropriate statistical analysis.

Salivary pH from all the three groups was estimated by using pH strips. Each patient was asked to rest the tongue on the hard palate so that the pH strip would not touch the tongue during the test. The strip was held vertically for 15-30 seconds with a cotton plier such that end of the strip was positioned at the floor of mouth from where the saliva was collected through sub mandibular ducts. The change in color of the strip was noted and matched with the color coding based on the pH strip and noted accordingly. Then the data obtained were subjected to statistical evaluation.

Statistical analysis was done by using Mann-Whitney test and ANOVA test (One-way analysis of variance) to compare the dermatoglyphic patterns & salivary pH levels between all the three study groups.

The ridges have various characteristics which play an important role in personal identification and also in human biology for various reasons.1 Forensic experts studied these ridge patterns as an unaltered tool for identification because they remain same from cradle to grave until the human body decomposes and palmists also have been studied them for fortune telling.8 During intrauterine period, dermatoglyphic patterns share their development time with the development and completion of dental hard tissues. They are being related by origin, the association has also been thought to be present in factors affecting and influencing dental structures, to have an effect on the dermal ridges. Dermatoglyphic patterns have been drawn attention in the field of dentistry and has been used to unveil oral diseases like dental caries, periodontal disease, dental fluorosis, oral cancer, bruxism, malocclusion, anomalies of teeth, cleft lip and cleft palate.2, 3, 4, 5, 6, 7, 8, 9

Even though DC and periodontitis are multi-factorial diseases, the genetic predisposition, environmental and host factors are considered to be important.7 DC and periodontitis might be the most possible reasons for changes in the oral balance, they may be assessed by measuring important salivary parameters particularly the salivary pH.10 A salivary pH of 7.0 indicates a healthy dental and periodontal situation; pH below 7.0 usually indicates acidemia. If this chronic condition exists, then the oral cavity is more susceptible to DC, halitosis and periodontitis.11 Saliva is vital to the integrity of the teeth as well as the soft tissues of oral cavity. It can maintain its pH by two mechanisms. Firstly, by the flow of saliva, carbohydrates that could be metabolized by bacteria are eliminated and also removes acids which are produced by bacteria. The other reason might be neutralization of acidic drinks and foods by the buffering activity of saliva.11 Thus, in the present study two important parameters has been considered to correlate, one was genetic component, dermatoglyphics and the other one being oral environmental factor, salivary pH.

Dermatoglyphic patterns may be in the forms of loops, whorls or arches, In the present study, results obtained were showed statistically significant difference (p<0.05) with respect to whorls and ulnar loop patterns in patients with DC (Group I) and CGP (Group II) respectively at slightly lower salivary pH towards controls (Group III) [Table 1] [Table 2] [Table 4]. The results obtained in the present study were in accordance with the previous studies done by Abhilash PR et al.5, Sharma A et al.12, Atasu M et al.13

Abhilash PR et al. investigated and analyzed the significance of dermatoglyphics in predicting the susceptibility of individuals to develop DC and reported that the DC susceptibility of an individual increased with incidence of whorl pattern and it decreased with incidence of loop pattern.5 Similarly, Sharma A et al. conducted a study to determine correlation between salivary bacteria interactions, dermatoglyphics and DC. He found that DC group had a decreased frequency of loops, whereas control group had an increased frequency of loops on all palmar digits. He also observed significant difference between subject and control groups for microbial growth.12 Padma et al. in their study, evaluated the dermatoglyphic peculiarities and caries experience of deaf and mute children. They found an increased frequency of whorl patterns in caries group and loops were more in caries free group.9

Atasu M et al. conducted a study to evaluate dermatoglyphic findings in patients with periodontal diseases and reported that dermatoglyphics could be used together with the other diagnostic methods and in the identification of the patients from distinct groups of periodontal diseases.13 A study done by Takahashi et al. on the effect of salivary pH on the growth of microorganisms showed that P.gingivalis grows at a pH of 6.5-7.0, P.intermedia grows at a pH of 5.0-7.0 and F.nucleatum grows at a pH of 5.5-7.0. He concluded that the periodonto-pathogens grows in a mildly acidic pH. This is in accordance with the present study for salivary pH of CGP.14, 15, 16, 17, 18, 19, 20, 21, 22, 23, 24, 25, 26, 27, 28, 29, 30, 31

The above previous studies were showed similar findings with the present study observations and reaffirms the role of genetic factors and environmental factors like salivary pH in the causation of DC and periodontal disease.