An autopsy study of suicidal hanging

Background: Hanging is the most preferred method of Suicide. Individuals are known to use different Ligature material and suspend completely or partially. hence, it is important to understand the Parameters involved in it. Large number of Suicidal death are reported.

Objective: To Understand Suicidal Hanging by studying different parameters involved in it like Ligature Material, Type of Knot. Sex and Age Group, involved, kind of Suspension and Position of knot.

Materials & Methods: A total of 634 cases were studied . Crime scene examination was done only in those cases where their were Suspicion on the Suspension Deaths. Rest of the cases the crime scene photographs and investigating officer records were the inputs. Only Suicidal Hanging were Considered for the Study.

Result: Suicidal Hanging contributed to 6.5% of the Total Cases. The Ropes[27%%] and Stole [36%]Contributed to the Most Preferred Ligature Material and Shoe Lace contribute[0.5%] to the least preferred Material for Self Suspension. Complete Suspension was observed in 62% of cases. The Majority of the Victims were Females contributing to 62% of the Deaths. The Major Age Group[50.76%] Involved was between 21-30years and the Uneffected Age group were those in the Extremes of Life i.e 1-10 and 61-70years. A Slip Knot was used on 97.73% of suspensions. In 78% of Suspension the Position of the Knot was situated over the [Typical Hanging]Nape of Neck. Married Victims Contributed to 37.45% of cases.

Conclusion: The different Parameters of Suicidal Hanging are necessary to understand the Suicidal Nature of Hanging.

Hanging is a Form of Mechnical Asphyxia, wherein the Constriction of the Neck is from a Ligature Encircling the Neck, the Constricting Force being the Weight of the Body [Whole Body weight or Mere Weight of the Head]. It is well known Form of Asphyxial Death, Since 2500 Years, with its Origin in Persia. The Oxford English Dictionary states that hanging in this sense is "specifically to put to death by suspension by the neck", though it formerly also referred to crucifixion and death by impalement in which the body would remain "hanging". Hanging has been a common method of capital punishment since medieval times, and is the primary execution method in numerous countries and regions. The first known account of execution by hanging was in Homer's Odyssey (Book XXII).1, 2 In this specialised meaning of the common word hang, the past and past participle is hanged3 instead of hung.

In hanging, ligature material may be any substance that is available at the time of the impulse and the Knot is frequently in the form of a single knot to produce a running noose or fixed by a granny or reef knot, occasionally a simple loop is used.7 About 800,000 people die by suicide worldwide every year,3 of these 135,000 (17%) are residents of India,4 a nation with 17.5% of world population. Between 1987 and 2007, the suicide rate increased from 7.9 to 10.3 per 100,000,8 with higher suicide rates in southern and eastern states of India.9 Hanging contributes to 26% of the primary methods used to die by suicide in 2012.10 Though the Numbers known to have increased since then. Hence, this Study helps us to Understand Suicidal Hanging better given the Long Period of Study and High Number of Cases Studied.

The study was conducted between 2009 and 2020 at various regions, Kingston & Bangalore. A total of 9684 Autopsies were conducted of which SuicidalHanging contributed to 6.5% (n — 634) of cases. Crime scene examination was done only in those cases where their were Suspicion on the Suspension Deaths. Rest of the cases the crime scene photographs and investigating officer records were the inputs . Autopsies were conducted with enmasse removal of Thoracic and Abdominal Organs and the neck was the last to be dissected after Exploring all the body Cavities.

The different type of ligature material used in suicidal hanging. 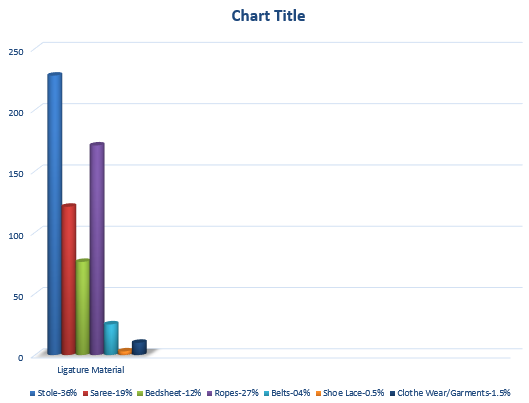 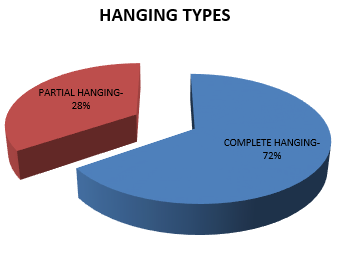 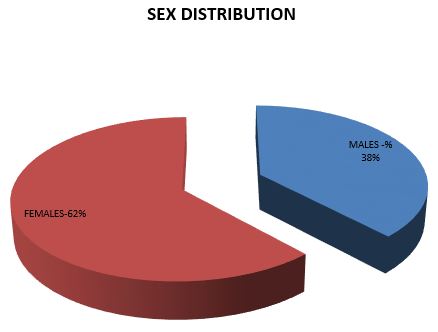 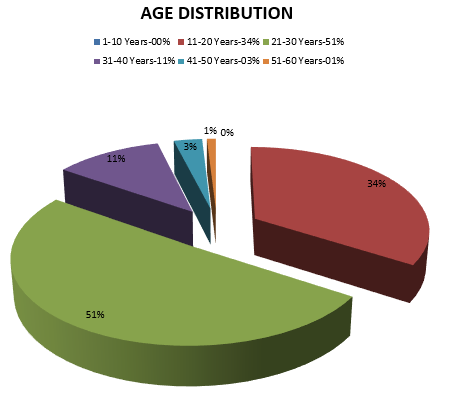 Types of knots in suicidal hanging. 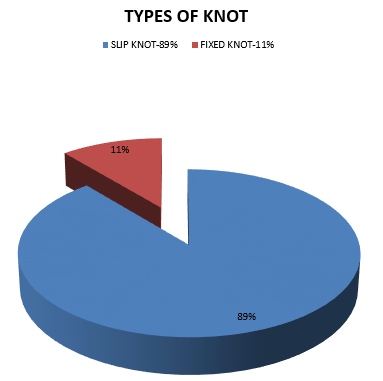 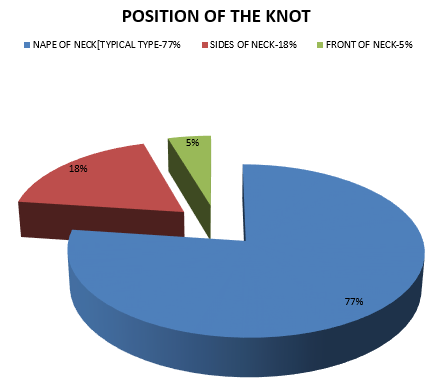 External findings of the ligature mark were described, photographed and sketched along with Taping of the Mark to correlate with the Possible Suspension Material. Internal findings of the neck studied layer by layer dissection of the neck. Carotid artery damage to the Intimae was by gross examination and Toluidine blue dye examination. Cervical vertebra fracture, thyroid, cricoid and hyoid bone fractures were confirmed by Radiological examination and further confirmed through the dissection method. The ligature material was always brought along with the dead body with the noose and knot intact (Figure 1).

This prospective study was conducted between 2009 and 2020. A total of 9684 cases were autopsied during this period, of which deaths due to hanging comprised 6.5% (n — 634) of Autopsies. Similar studies conducted by Hassan et al.11 in a two-year period in Kuwait reported a total of 118 cases. In another study conducted by Kumar and Verma 12 in Lucknow (India) a total of 4405 cases were autopsied in a five-year period of which Hanging contributed to 10% of cases. Dean et al.13 had studied on 229 cases. This Variations in the Number of Cases per Thousand Autopsies is possibily due to Regional Variations ,Influence of Cultural and socioeconomic factors. Hence the present study is Important for its high Number of Cases Studied as compared to other Studies, this makes it more Unique in its Nature. The commonest and Most preferred choice of ligature material used were [Female dress (soft) material] Stole in 36%[n-228], followed by Rope in 27%[n-171] and the least Preferred Ligature Material were Shoe Lace [0.5%,n-3] and Garments/Cloth Wear contributing to 1.5%[n-10] cases. This were close to the Observations made by Jayprakash and Sreekumar14 Sharma et al.15, they had opined 47% and 56% of their victims respectively preferred Soft ligature material like sari, Stole, shawl. In another Study conducted by Pradhan et al., Only 9.09%[n-4] used Sari/Stole Material.

In the present study hard ligature materials like Plastic Rope, Coir Rope and Cotton Rope contributed to 27% of cases, similar were the observations made by Jayprakash and Sreekumar.14 This wide nature of deviations in the choice of ligature material depends on the Cultural, Regional influence on the Dressing/Clothing of an Individual. It is observed that Sari in the southern part of India and Stole [Chunni] among females from northern India are widely used and are easily available in the house and hence the obvious choice in these regions. Whereas in the UK (Bennewith)16 the commonest choice was hard materials like Rope, Belt, Cord and Cable, soft materials like Sari or Stole were least found in that region. Hence factors like sex of the victim, culture, geographic location and place of the act play an important role in this. The present study also indicated the fact that 72% of the hangings were complete [n — 456], these results are close to the observations made by Sharma et al. 15 and Saisudheer and Nagaraja,17 in their study, 68% and 64% of the cases respectively were due to Complete Hanging, however these observations are contrary to those made by Dean et al.13 and Pradhan et al.18 They observed that 83.4% [n– 229] and 47.37% of their cases were due to Partial Hanging, all these observations highlight the regional influence, lifestyle and to a certain extent the type of residence.

In the present study females were the Major Victims comprising 62% [n-393] of cases and males contributing to 48% of Cases. and the majority belonged to 21-30 years (46%; n — 291) and the least affected age group was from those below the first decade and above 6th decade, these results are contrary to the claims made by Jayprakash and Sreekumar 14 and Sharma et al. 15 wherein, the male to female victim ratio was 2:1. However their observations closely matched with the age group involved. The observations made by Kurtulus et al., 19 Jayaprakash and Sreekumaran, 14 Abd-Elwahab et al., 12 Suminska-Ziermann 20 and Al Madni et al. 21 are more deviating as they found that the Males were more affected than females in the ratio 3:1. This wider variation in the sex group is possibly due to the cultural, religious, economic and lifestyle factors driving the individual to Suicidal Hanging.

In the present study the most preferred knot was the Slip knot, contributing to 92% (n — 583) of cases. These results were contrary to those made by Sharma et al. 15 wherein they had concluded 71% of their victims had fixed knot. The observation made by Saisudheer and Nagaraja 17 was close to the observations made in the present study.

Hence the type of knot determine the ligature mark and its continuity over the neck. The Married victims contributed to 36[n-228]% were married, Contrary to the observations made by Saisudheer and Nagaraja17 wherein 82% of his victims were married. In the present study, 78% (n – 494) of the victims had their knots over the Nape of the neck (typical hanging), Contrary to the views of Saisudheer and Nagaraja 17 and Sharma et al. 15 who had opined that 89% and 88% of the cases respectively, were Atypical Hanging [knot over the sides of neck]. This is an area which need to be Studied Furhter,the possibility of Psychological Factors influence cannot be ruled out. And the other possible factors like the victim tying the noose around his neck during the time of suspension and then jumping over it, and the other possibility is that the Changing Knot position after suspension. The study highlights the influence of regional, religious, cultural, socioeconomic factors and demographic factors responsible for Suicidal Hanging. It also encourages further research into these factors so as to Understand Suicidal Hanging.

Using the phrase ‘commit suicide’ is offensive to survivors and frightening to anyone contemplating taking his/her life. It’s not the same as ‘being committed’ to a relationship or any other use of it as a verb. Suicide prevention (SUPRE) World Health Organization2012https://www.who.int/health-topics/suicide#tab=tab_1

After 50 student suicides, Andhra and Telangana govts wake up to looming crisis". The News Minute. 20171013

K Kannan A Textbook of Medical Jurisprudence and Toxicology25th 2016493https://www.snapdeal.com/product/a-textbook-of-medical-jurisprudence/672957030026

A Pradhan B K Mandal C B Tripathi Hanging: nature of ligature material applied and type of hanging according to point of suspensionNepal Med Coll J20121421039