Poison is a substance that causes damage or injury to the body and endangers one’s life due to its exposure by means of ingestion, inhalation, or contact and it is an important public health problem causing significant morbidity and mortality throughout the world. Hence, this study was done at tertiary care Hospital in north India (Haryana region) from year 2012 to 2013. 59 cases of acute poisoning in adults due to chemicals were included. Data on age, sex, marital status, occupation, locality, type of poison, were recorded and analyzed by descriptive method. Among 120 postmortem cases, 59 cases were of poisoning. Males (40 cases) outnumbered females (19 cases) and 46 cases were married. Peak occurrence was in the age group of 31-40 years (18 cases). Occupation wise poisoning was commonly found among male laborers (25.4%) and farmers (20.3%) followed by house wives (28.1%) and students (6.8%). Organophosphorus was the commonest agent (42.4%). The incidence of poisoning and its morbidity and mortality can be reduced by developing and implementation of effective prevention strategies.

Poison is a substance that causes damage or injury to the body and endangers one’s life due to its exposure by means of ingestion, inhalation, or contact. Worldwide various agents such as agrochemicals, drugs or environmental agents are used as poisoning agents.1 There are more than 9 million natural and synthetic chemicals worldwide, and the list keeps growing inexorably.2 Organophosphorus (OP), Organochlorines (OC), Carbamates and Pyrethroids compounds are used as pesticides, herbicides, and chemical warfare agents in the form of nerve gases. Acute poisoning by these agents is a major global problem with thousands of deaths occurring every year.3 As per WHO records, more than 2 lakhs deaths occur per annum due to poisoning, of which maximum number of cases were agricultural professionals from developing countries. Acute poisoning is a medical emergency and morbidity and mortality related to poisoning is increasing day by day. In India, annually more than 50 thousand people die due to poisoning.4 As trends of poisoning varies from place to place, by knowing about patterns of poisoning of particular region, it will be easy to reach the source and reason behind poisoning cases, which will be helpful for prevention or reduction of it, as these tends to affect younger and productive age groups, which leads to increasing epidemiological social and medico-legal problem.5

In the present study 59 patients with severe poisoning came for postmortem at tertiary care Hospital in north India (Haryana region) from year 2012 to 2013, were studied for detail epidemiological and medicolegal analysis. Case of toxic effect of insecticide, pesticides and other noxious substance eaten as food and toxic effect of inhaled poisons were reported. This study include 40 males (M) and 19 females (F) consecutive cases with history of poison and route of administration (ingestion, inhalation and other), clinical symptom and signs help to diagnose the poisoning. The present study is an important and useful study of poisoning trends in north India.

A total of 59 cases (40 males and 19 females) who died with alleged history of poisoning at tertiary care hospital at north India (Haryana region) in the time period of 2012 to 2013. Total 59 cases (49.17%) out of 120 were only of poisoning in that particular time (Table 1). Out of 59 cases 40 (67.8%) were male (M) and 19 (32.2%) were female (Table 2) (Figure 1). Male victims suffered poisoning more commonly than female victims. Numbers of male victim were probably more because India is a developing country and most of the people belong to middle or poor family. Financially they are facing more difficulty and due to this stress factor they follow the suicidal foot step. Others factor include troubles with relationships, or from bullying and a poor handling of emotions. 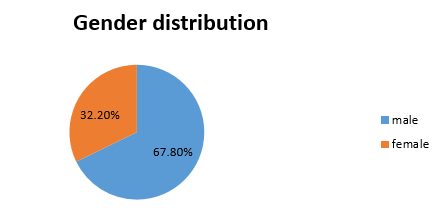 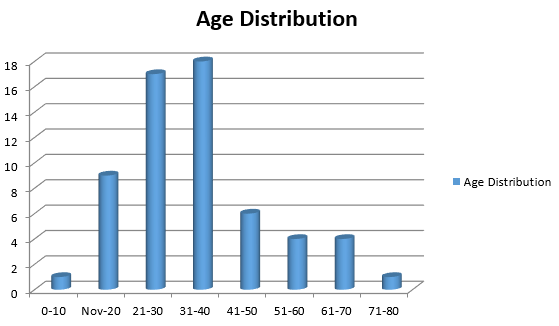 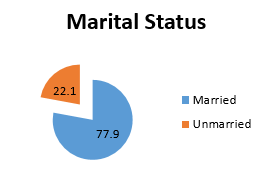 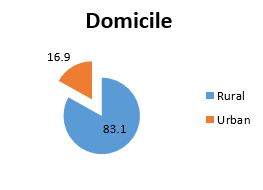 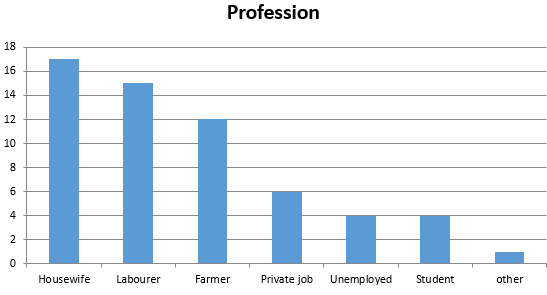 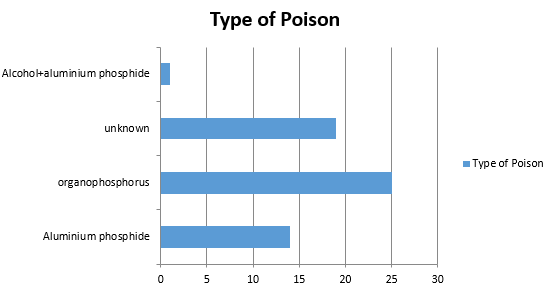 In the present study the commonest poisoning agent were organophosphorus compounds. Married males outnumbered females. Most of the cases were in the age group of 31-40 followed by 21-30 years. Acute poisoning was commonly seen among house wives, male laborers, farmers and students. Most of the victims belonged to rural region.

Majority of victims were in the age group of 30 to 40 years (30.5%) followed by 20 to 30 year age group (28.81%). This is a cause for concern as this age group is the most productive group of any society. This can be explained by the fact that the person of this age group are suffering from stress of the modern lifestyles. These findings are in agreement with other studies.2, 3, 4, 5, 6, 7, 8, 9 Among 59 cases 46 (77.9%) were married remaining 13 (22.1%) were unmarried, these findings were correlated with the previous maximum studies.1, 2, 3, 4, 5, 6, 7, 8, 9, 10, 11, 12, 13, 14 Regarding the social background of the victims 49 victims (83.1%) were belongs to rural area and 10 (16.9%) were belongs to urban area, these findings were in concurrence with the previous studies.1, 2, 3, 4, 5, 6, 7, 8, 9, 10 Occupationally, many cases were found among laborers (15 cases, 25.4%), farmers (12 cases, 20.3%) and house wives (17 cases, 28.1%) as these groups are more vulnerable groups and easily exposed to the poisoning agents. Poverty, inadequate income to run the family, monsoon failure was responsible for higher incidence of poisoning among laborers and farmers.14 Factors like dowry, cruelty by the in-laws, family quarrels, maladjustment in married life and dependence of women on husband are responsible for the higher incidence of poisoning among house wives.15 As agriculture is the main occupation of the people in our country and organophosphorous and Aluminium phosphide were commonly and easily available to farmers for their crops and their storage purpose. In our study the most commonly used agent for poisoning was organophosphorus 25 (42.4%) followed by aluminium phosphide 14 (23.7%). Organophosphorus poisoning is the most common suicidal poisoning substance in our study which was correlated with previous studies.1, 2, 3, 4, 5, 6, 7, 8, 9, 10, 11, 12

We observed, poisoning was common among productive age group (21-40 years) that produce a huge socio economic burden on the society. The use of certain poisons to commit suicide depends on the availability and accessibility of the agent to an individual.12

The present study highlights the trends of poisoning in the region of Haryana. Poisoning was more frequent in younger male populations of rural areas and affecting the married people most. The major occupation of Indian people was agriculture (farmer) and usage of insecticides and pesticides is extensively used, so preventive measures in the form of public awareness, judicial usage, storage, spraying in fields with use of protective measures of insecticide should be promoted.